At the end of a two-day meeting on Wednesday, as expected, the Fed did not raise interest rates. In the statement, the Fed dropped the word “patient” on acting on rates, but signaled it is in no hurry to raise rates. “Just because we removed the word patient from the statement doesn’t mean we are going to be impatient,” Chairwoman Yellen said in a post meeting press conference. She also indicated the Fed is not yet set on raising rates in June. In addition, the Fed cut its economic growth forecasts through 2017 and said that it needs to see better job market and higher inflation before it raises rates.

After the rate hike in December last year, many economists expected the Fed to raise rates in consecutive meetings. They argued that Fed was behind the curve and inflation will accelerate eventually after three rounds of quantitative easing and zero interest rates for six years. So the Fed needs to play catchup. However, with inflation rate still below the 2% target, the Fed is in no hurry to hike rates.  In February, the headline inflation fell to 1%, though core inflation excluding food and energy rose to 2.3% (see Figure One). The GDP deflator, which the Fed pays more attention to, remained at 1% in Q4 2015. As oil prices stabilize and core inflation continues accelerating, we expect the headline inflation to reach the 2% target some time in 2017.

Figure One: US Headline vs. Core Inflation Rate

The other object of monetary policy is full employment. After seven years of economic expansion, job market has improved dramatically. The unemployment rate has declined from over 10% to 4.9%, a level which most economists think would start to create more inflation.  However, there is still a lot of “slack” in the labor market as the labor force participation rate dropped to 30-year low at 62.5% a few months ago (see Figure 2).  The Fed is fully aware of the labor market situation. However, we did see the labor participation rate picking up a bit recently and wage pressure building up, we expect to see more inflation pressure from the labor market later this year.

The other interesting question investors often ask is “Why doesn’t the money printing since the Great Recession cause more inflation?”  The simple answer is that the dramatic liquidity injection from the Fed’s quantitative easing programs did not result in dramatic increase in money supply as the banks restricted their lending activities. Since August 2008, the monetary base jumped by 3.5 times (see Figure 3), while the money supply only increased by 60% (6% annually). The velocity of money, which measures how fast the money is transacted, dropped from 1.9 times to 1.5 times a year (see Figure 4). As the economy improves, we expect the banks will increase lending and more money will move into circulation resulting in more inflation pressure.

Figure 3: Money Supply vs. Monetary Base 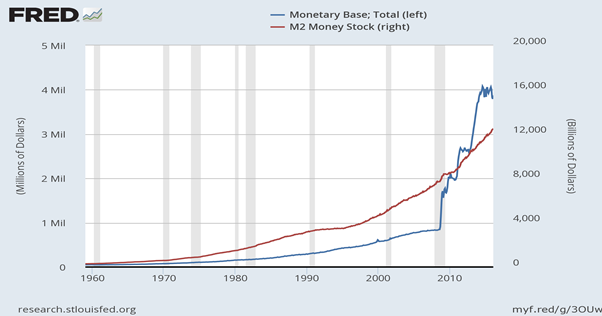 In summary, we believe the Fed does have some time to be “patient” as inflation is not an imminent threat. However, the inflation pressures will build up as banks’ lending picks up, wages increase and oil price rebounds further. We expect the Fed will continue its path of tightening at a moderate pace.