During her speech last Friday before the Greater Providence Chamber of Commerce, the Fed Federal Reserve chair Janet Yellen indicated the Fed may raise rates at some point this year. She said, “ … if the economy continues to improve as I expect, I think it will be appropriate at some point this year to take the initial step to raise the federal funds rate target and begin the process of normalizing monetary policy.”

With the rate hike in the horizon, investors may wonder what will happen to their bond portfolio. If you are a student of history, you may find the past experience a useful guide here. Figure 1 plots the interest rates, inflation and unemployment rate since 1990. The rate hikes in 1994 and 2004 both started when the unemployment rate was around 5-6% and kept dropping. The current unemployment rate stands at 5.5%. Even the inflation threat is less of a problem than that in the last two rate hikes, it is totally justified that the Fed starts tightening as the job market continues to improve. 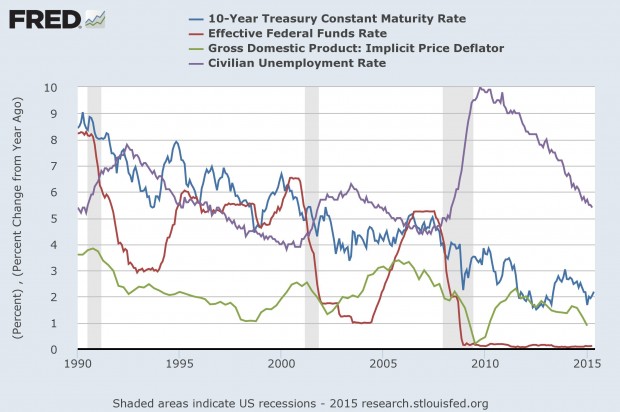 In the dramatic rate hike of 1994, the Fed raised fed funds rate by 300 basis points over the course of one year. As a result, the ten-year Treasury rate rose by 200 basis points and Barclays Aggregate Bond Index dropped by 2.24% (see Table 1 for more details). However, in the rate hike of 2004, the Fed adopted a more orderly and slower approach. It took two years and 25 basis point rate-increase every meeting to raise the Fed funds rate by 425 basis points. To everyone’s surprise, the long-term rates barely moved. After dropping by 30 bps during the first part of rate hike, the Ten-year Treasury rate ended up on 60 bps higher than when the rate hike started. As a result, the Barclays Aggregate Bond Index actually gained 5.8% in the two-year period.

What will happen in the rate hike of 2015? We have two predictions:

(1) The rate hike will be slow, orderly and data-dependent. The current GDP deflator, the Fed’s favorite measure of inflation, stays at 1%, which is well below the Fed’s target of 2%. There is no rush for the Fed to jerk up rates. Globally, just to the contrary, other major central banks are implementing loose monetary policies, which will make the US dollar even stronger. Strong dollar may hurt US exports, thus GDP growth.

(2) Bonds will have slightly negative returns. As our baseline projection, the Fed will raise fed funds rate by 300 bps in two years. With respect to ten-year Treasury rate, given its current low level, we expect it will rise by 150 bps, somewhere between the 1994 and 2004 rate hikes. The current yield of Barclays Aggregate is 2.2%. Roughly, the Barclays Aggregate has 5-year duration, so we expect it to return -1.5% annually in next two years. 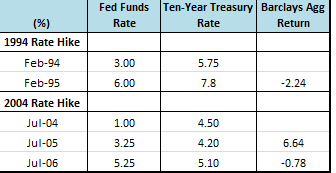