On June 23, UK will hold a referendum on whether Britain will remain at EU.  With 11 days to go, the most recent poll conducted by the Economist.com shows that 43% are in favor of “leaving”, 42% like “remaining” and 12% “don’t know”.  As Brexit becomes a real possibility, the stock markets across the globe are getting skittish.  Last Friday, Britain’s equity index FTSE 100 dropped by 1.86% and S&P 500 Index declined 0.92%.

Brexit is likely to have significant negative impacts on the UK economy and its stock market in the near term, but the impact on the US stocks will be minimal, though the uncertainty may generate some short-term market volatility.  Most economists agreed that Brexit would result in negative GDP growth for Britain in the short term.  Britain’s exports, of which EU accounts for 48%, will be likely to decline without a new trade deal in place after Brexit. British stocks could lose as much as a quarter of their value once the market prices in the economic impact,  according to a study by risk modeling company Axioma.

Among the companies in the S&P 500 Index, sales generated from Britain are less than 1%. Even Britain falls into recession, the real impact on US companies is likely to be minimal. However, the uncertainties on Brexit and what would happen afterwards could generate significant market volatility globally. Over the most recent one-year horizon, the FTSE 100 Index declined by 9.86% while the US market remained flat. Although we have not seen much global impact of potential Brexit, we expect to see further decline in FTSE 100 Index and more volatility in the global equity markets if Britain chooses to exit EU. 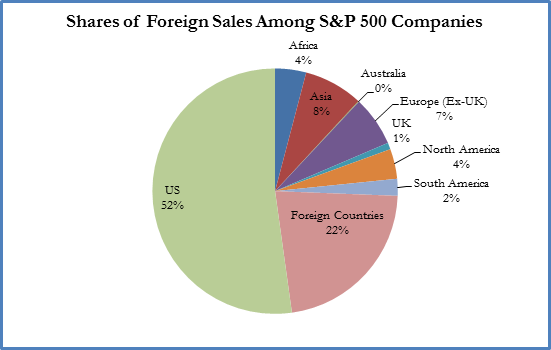 One-Year Stock Performance: UK vs. US 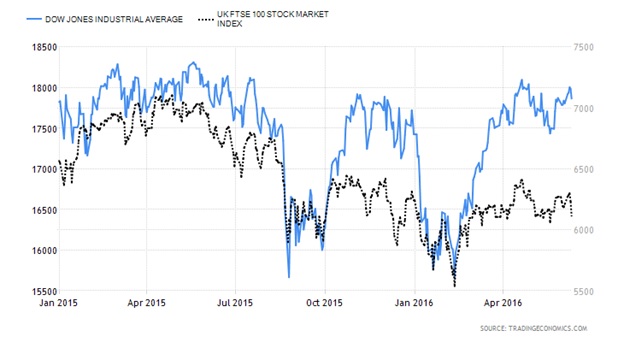